Africa is home to many beautiful wild animals, stunning scenery, and all kinds of interesting things. The Baobab is the real representation of life in the African plains. This giant, strange looking tree grows in low-lying areas all over Africa, Madagascar, and Australia.

The Baobab has nine different species. It belongs to the genus Adansonia cluster of trees. There are only two species native to the African mainland, which are the Adansonia Digitata and the Adansonia Kilima. Six of the other species can be located in Madagascar and another in Australia.

The baobab tree can grow to enormous sizes and can live up to 3,000 years. They go by many nicknames as well which include boab, boaboa, tabaldi, monkey bread, upside down tree, bottle tree, and dead rat tree, to name a few.

It’s definitely the symbol of the African jungle. To feed your curiosity about this giant tree, here are some quick fun facts about the Baobab tree.

The Baobab Tree is also known as the Tree of Life

This massive tree is also known as the tree of life, because it has many useful properties. It acts like a huge succulent and its trunk is packed with up to 80% water. San Bushmen used to rely on these trees for water when the rivers started to run dry and when there was no rain.  One baobab tree contains 4,500 liters (or 1,189 gallons) of water. The center of the tree can also give people shelter. 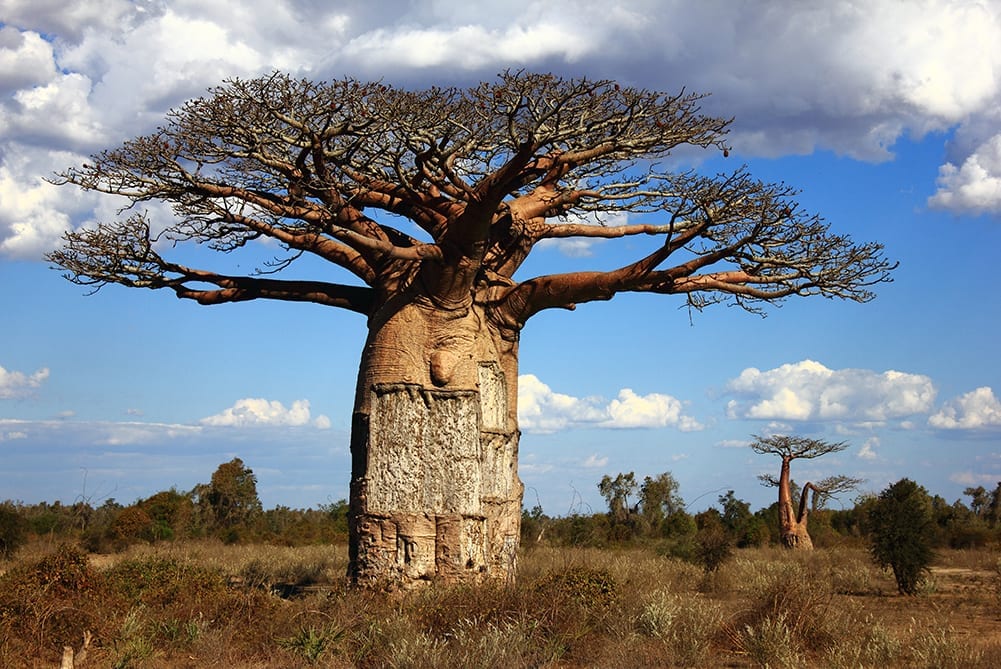 The bark and inner parts of the tree is soft, fibrous, and resistant to fire. It can be used to weave clothes and rope. Other parts of the baobab can also be used to make rubber, soap, and glue. The leaves and part of the bark is used in traditional medicine. It’s also a source of life for African wildlife. It provides food and shelter for a variety of species, from the tiniest insects to some of the biggest animals in Africa like the elephant.

It has a Nutritious Super Fruit

The baobab tree has a unique fruit that resembles an oblong velvet covered gourd. The fruit has big black seeds and it has a slightly powdery tart pulp in the center. There are a lot of health benefits that you can gain from eating the fruit and leaves. The young leaves can be an alternative to spinach, while the pulp of the fruit can be soaked and blended into a drink.

The baobab fruit is a super fruit thanks to its high levels of potassium, iron, vitamin C and calcium. According to some reports, the pulp has ten times the amount of vitamin C as oranges. It’s recommended for weight loss, skin elasticity, and contains 50% more calcium that spinach. It can also help the health of your cardiovascular system.

There are many Stories and Legends

When it comes to the baobab tree, there are tons of traditions and legends. The African tribes believe that the baobab tree once grew upright. Because it considered itself to be better than all the other trees, the gods decided to teach it a lesson. To stop its boasting, the gods uprooted it and planted the tree upside down to teach it humility. Specific trees in other parts of Africa also have stories attached to them. Zambia’s Kafue National Park is home to one particularly large tree. The locals refer to it as the Kondanamwali or “the tree that eats damsels”.  According to the legend, the tree fell in love with four local women, who rejected the tree and instead chose to look for human husbands. As a form of revenge, the tree pulled the ladies into its bark and kept them there forever.

One of Namibia's trademarks - DeadvleiDeadvlei is a white clay pan located near the more famous salt pan of Sossusvlei, inside the Namib-Naukluft Park in Namibia 📌 Also written DeadVlei or Dead Vlei, its name means "dead marsh" 🤩Photo by @pics_of_africa ... See MoreSee Less

Tucked away amongst dense knobthorn and jackalberry trees along the Manyeleti River, Sabi Sands’ @simbambiligamelodge offers luxury spaces, incredible game drives, and an exclusive African bush experience. This dreamy lodge boasts Moroccan-style suites that have been beautifully designed to blend with the surrounding natural environment. The perfect blend of carefully selected elements comes together to create a romantic atmosphere to charm all who visit Simbambili.@simbambiligamelodge offers guests a selection of eight luxury rooms, each of which has a distinctly Moroccan feel. These beautifully-decorated suites feature their own private plunge pool that overlooks the watering hole. Guests can unwind on their private deck while watching wildlife from their daybed and soak up the spectacular views over the vast savannah grassland that teems with life.The Big Five roam free in the Sabi Sands Reserve which shares fenceless borders with the world-famous Kruger National Park. Aside from encounters with the famous Big Five, the reserve offers an abundance of game and is rich in birdlife boasting over 500 bird species. Don’t miss the chance to view the wide variety of wildlife from steenbok and Burchell’s zebra, to African civets and spotted hyenas. Head out for a sunrise game drive to catch the early birds, enjoy a mid-morning guided walk, or spot nocturnal species by torchlight on evening game drives for the greatest chance to see a variety of animals.Experience a true safari at @simbambiligamelodge. Contact us at [email protected] and one of our travel experts will get back to you. ... See MoreSee Less

Lion cubs are much like children. They are always on the move 🏃 In order to keep them all together mother lionesses are known to pick their cubs up with their mouths 🦁 The cubs will relax their muscles, allowing the mother to move them easily.Photo by @reana_wildlifeFollow @secretcapetown for more and tag us or use #secretcapetown to be featured. ... See MoreSee Less