Did you know that elephants can die of a broken heart or that an elephant’s tooth can weigh as much as three kilograms? Being the largest of all land mammals on earth, elephants are magnificent, fascinating creatures. Not only are they intelligent beings with complex physical and social needs, but they express humour, love and compassion.

If you’re like most humans, you’ve probably had a love affair with elephants since a child, but because of poaching and habitat loss, the population of these magnificent beasts is fast decreasing. You probably do not need another reason to love elephants – but poaching is out of control. To raise awareness and mark World Elephant Day on the 12thAugust, we’ve made a list of ten amazing, elephant-astic facts to make you love them even more. Elephants are amazing when it comes to family bonds and loving their offspring.Showing similarities in human behaviour, they have the emotional connections we share with our families. They form alliances to solve problems, and they perform greeting ceremonies when a friend returns. Bonding easily, they cuddle and show empathy by putting their trunks in each other’s mouths, offering comfort through touch.

The African elephant is not just the largest living land animal, but it also has an enormous brain size to match. Their brains can weigh up to a whopping 5.4kg, which would explain their incredible memory-power and high level of awareness. Along with humans and other primates, elephants can recognise themselves in a mirror. Not only does this show a sense of self, but it shows they can identify themselves as individuals, rather than just part of a herd.

Having a sense of self may be the reason for their social and altruistic habits. Just like humans, elephants will mourn and cry when they lose a loved one. They cover the body with leaves and stand silently next to their departed loved one for hours, sometimes for days. Later, and even every year on their anniversary, they may return and pay respect to the bones by gently touching it with their trunks and feet. Partially blind, elephants use hearing and vibrations to navigate direction.Boasting nearly 2,000 special genes that detect odours in the environment, they can also detect sub-sonic rumblings made by other elephants and humans with sensory cells in their feet. When an elephant places its trunk on the ground and positions its feet, the vibrations travel through the body to the inner ear. Very interesting fact!

An elephant’s skin is actually very delicate and can easily get burned in the sun. To prevent sunburn, these intelligent creatures created their very own sunscreen. After a bath, they roll in mud and toss sand over their bodies to protect themselves. They also stop their young from getting burnt by standing over them to cast a shadow. Clever, right! Oh yes, they are the one species that instinctively care for their environment by digging waterholes and creating pathways, giving other animals access to water too. In fact, many animals depend on them for their survival, and many plants will not germinate unless eaten by an elephant. Eating up to 18 hours a day, elephants also keep the land fertile by generating up to one tonne of dung per week.

No, we are not kidding. Who would have thought the largest animal with the mostcommanding presence would be terrified of ants and bees? While there is good logic behind these fears, this only confirms even more that elephants are gentle giants.

Elephants live in families for life, know their relatives, and are ruled by a female. She’s fierce, she’s a leader, she’s a protector of her herd, and she will decide where and when they move and rest, day to day. While the females travel, protect and support each other from birth till death, they push the males out of the herd to roam in temporary “bachelor herds” until they reach sexual maturity. 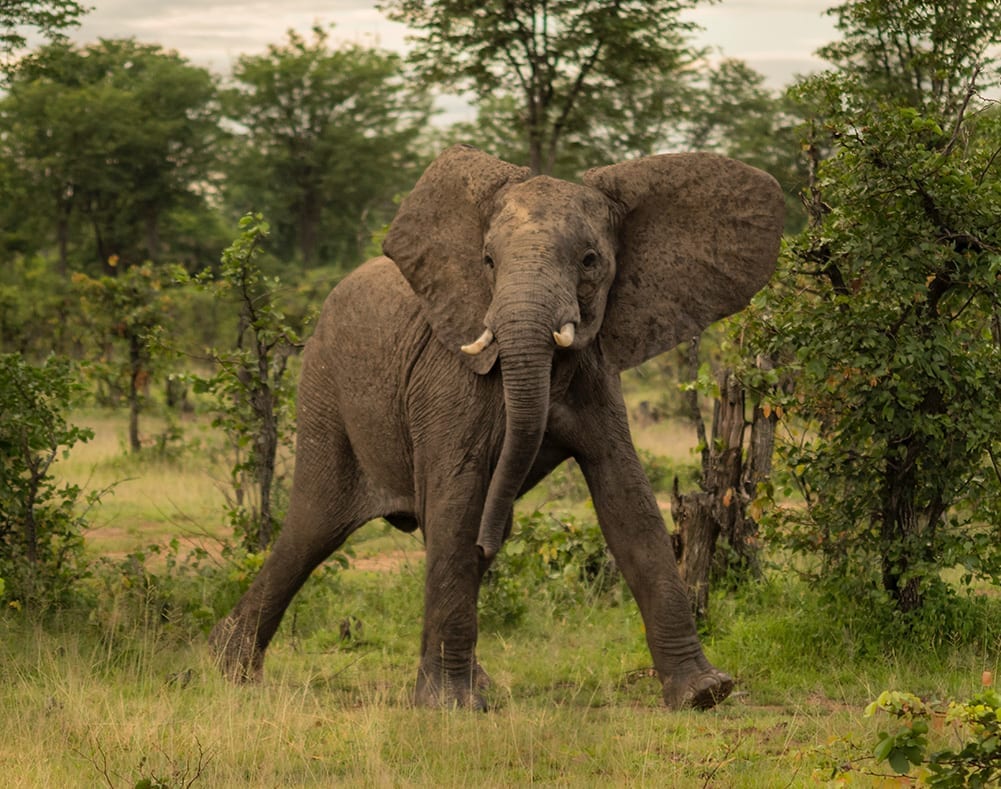 You definitely do not want to be in the path of a 6000-kilogram elephant charging your way. Elephants run faster than you would expect, easily reaching speeds of 40km/h – not even Wayde van Niekerkerk can outrun an elephant.

While it’s a tragedy, losing any animal to extinction, it’s a special tragedy, losing our very own African elephant. Elephants have no real predators in the wild, except humans, and will only truly be safe when the demand for ivory ends. Until then, you can help save our elephants by knowing these ten amazing facts and by spreading the word.